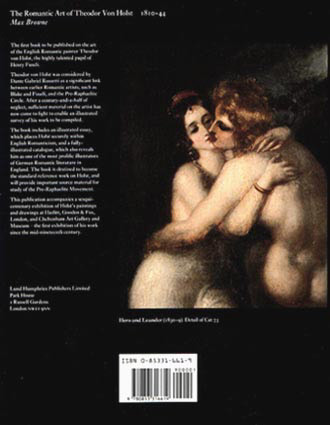 The Romantic Art of Theodor Von Holst 1810-44, was published in 1994 by Lund Humphries to coincide with the 150th anniversary exhibition of the artist's death held at the galleries of Hazlitt, Gooden & Fox in London and Cheltenham Art Gallery and Museum.

The extensive illustrated introductory essay, Fuseli's Pupil and Rossetti's 'Great Painter', includes sections on; 'Lawrence and Fuseli', 'Young artist from a musical family', 'Faust and Wainewright', 'Edward Lytton Bulwer', 'Taste and Patronage in the 1830's', 'Satan, Rossetti and 'The Bride'', 'Early Death and the Pre-Raphaelites' placing Holst securely within English Romanticsm. This is followed by a fully illustrated catalogue which also reveals the artist as one of the most prolific illustrators of German Romantic literature in England. Also included are; a 'Biographical Outline', 'Appendices - (I) Sale of Holst's Remaining Works, (II) The Rolls Album and Family', 'Select Bibliogaphy', and a 'Checklist of Paintings'.

The book is the standard reference work on Holst and provides important source material for study of the Pre-Raphaelite movement. Both the book and exhibition were reviewed by: The Burlington Magazine (July 1994), Apollo (July 1994), London Evening Standard (5 May 1994), Pre-Raphaelite Society Review (Autumn 1994).

Copies may be obtained from:-

or by email enquiry to info@vonholst.info

sample entries from the 1994 catalogue