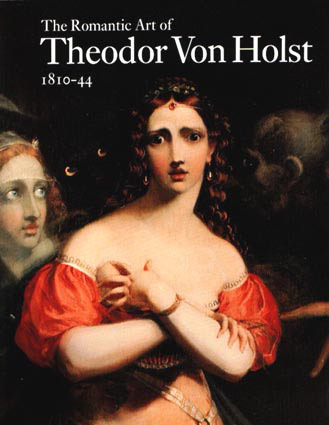 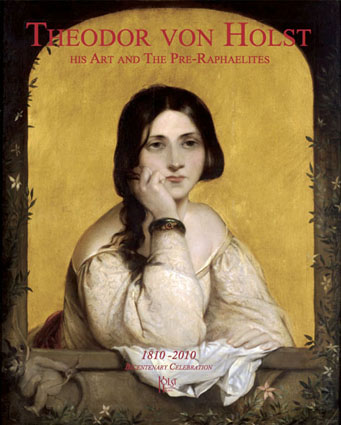 The London born painter Theodor von Holst occupies a unique position in the history of British Romantic Art between his vivacious and eccentric master Henry Fuseli (1741-1825) and his most important admirer Dante Gabriel Rossetti (1828-1882). Together Holst and Rossetti form an artistic bridge from the art of the Regency to that of the Symbolists and the Aesthetic Movement at the end of the 19th Century and beyond. However the nature of their extraordinary romantic output appealed to the connoisseur rather than the public: a cultural difference that both artists had to grapple with throughout their careers.

As part of his contribution to Gilchrist's Life of William Blake (1863), Rossetti praised Holst and described him 'as a link of some consequence' between the earlier generation of history painters and the Pre-Raphaelite circle, who frequented a particular West End restaurant because it was hung with Holst's pictures. Rossetti's first widely published poem The Card-Player was based on The Wish painted by Holst in 1841. Had he lived longer it is intriguing to speculate that Rossetti might have approached his early hero, rather than Madox Brown, to become a pupil since, in his famous first letter to the latter, he wrote of 'that great painter Von Holst'.

Unfortunately the fantastic, supernatural and erotic content of Holst's art precluded favour with the increasingly bourgeois London public of the 1830s and 40s despite the high praise bestowed on him by his peers. The resultant neglect and obscurity into which his work had fallen, until the 1960s, is to be much regretted and it is mouth-watering to consider the dozens of paintings and hundreds of drawings that remain to be discovered. However by the early 1990s a sufficient body of work had come to light to provide a preliminary appraisal and much of this is contained in the first monograph/catalogue on Holst, The Romantic Art of Theodor Von Holst 1810-44, published to accompany his first exhibition, held in London and Cheltenham in 1994.

Since then paintings, drawings and further material has slowly emerged to provide a fuller view of Holst's exceptional abilities and role as a link of influence to the PRB and their wider circle including the sculptor Alexander Munro (1825-71) and painter Arthur Hughes (1832-1915). A small group of Holst's drawings at The Britten-Pears Library demonstrate the artist's affinity with designs by Blake and another shows the subject and stylistic baton picked up by Rossetti, Millais and Hughes. Holst's early patronage by, and intimacy with, Sir Thomas Lawrence is evident in the large and splendid portrait of Jessy Harcourt, a sister of John Rolls one of the artist's most important patrons. An interesting preliminary pastel sketch of Jessy has also recently come to light. From Rossetti's friend Munro comes a Holst sketchbook, passed down through his family which, it is believed, was the one described by Hughes in 1892 as "the sketchbook by Von Holst that Gabriel had." It contains a wide variety of subject matter and tantalising references to designs and pictures that we hope may still exist. This sketchbook was included in the 2006 Gothic exhibition at Tate Britain and again (open at a different page) in the bicentenary exhibition at the (Gustav) Holst Birthplace Museum in Cheltenham in 2010.

The Tate's ground-breaking Gothic Nightmares exhibition in 2006 presented Holst on a wide public stage at last, as a significant figure in British Romantic art, along with Fuseli, Blake and Gillray. Their Pre-Raphaelites exhibition in 2012 showed the side of Holst that most appealed to these 'desperate romantics' by focusing on his most popular painting, The Bride of 1842 (featured on the cover of the 2010 catalogue shown above and more recently the subject of a Tate Britain conservation study), which was highly praised by Rossetti and copied by him in the form of an attractive little watercolour sometime after the establishment of the PRB in 1848. Prior to this Samuel Carter Hall, the influential editor, critic and champion of Holst wrote of him as 'in advance of the age' and considered his large prize-winning painting of The Raising of Jairus's Daughter (BI 1841) as leading to 'a day that shall witness the revival of the Arts in Great Britain'. This was accomplished four years after Holst's death by the PRB.

2012 was a watershed year for Holst. Three important paintings enjoyed simultaneous international exposure by their inclusion in major touring exhibitions during 2012/2013:-

The Wish was included in Bohemes which started in Paris before travelling to Madrid and Budapest. It was hung prominently at the magnificent entrance of the exhibition, below the main staircase of the Grand Palais, which somewhat makes up for the fact that there was almost no information supplied as to artist or work.

The Bride joined the PRB in Tate Britain's Pre-Raphaelites: Victorian Avant-Garde which then travelled with the show to the Pushkin Museum in Moscow. Leading art critic and Holst enthusiast, the late great Brian Sewel reviewed the Tate show in the London Evening Standard where he remarked on how recent Holst research has made a significant contribution to the appraisal of influence on the PRB circle. It is appropriate that Brian's substantial archive has recently been donated to the Paul Mellon Centre for Studies in British Art, in London, and his seminal Holst painting, The Wish, to the corresponding and major collection at the Yale Center for British Art in the USA. Thus the three most important known paintings by Holst are now in the world's leading public collections of British Art in the UK, United States and Kunsthaus Zurich, Switzerland, home of Holst's master Fuseli.

Fantasy based on Goethe's Faust, owned by Tate Britain, appeared in Dark Romanticism from Goya to Max Ernst at the Frankfurt Staedel Museum before travelling to The Musee D'Orsay, Paris, in March 2013,

Since then several further works by Holst have appeared on the market including a striking Faustian painting exhibited at the Suffolk Street Gallery in 1838. The Dice (below) was knocked down to its new appreciative American owner during Christie's (South Kensington) last paintings sale in 2017. 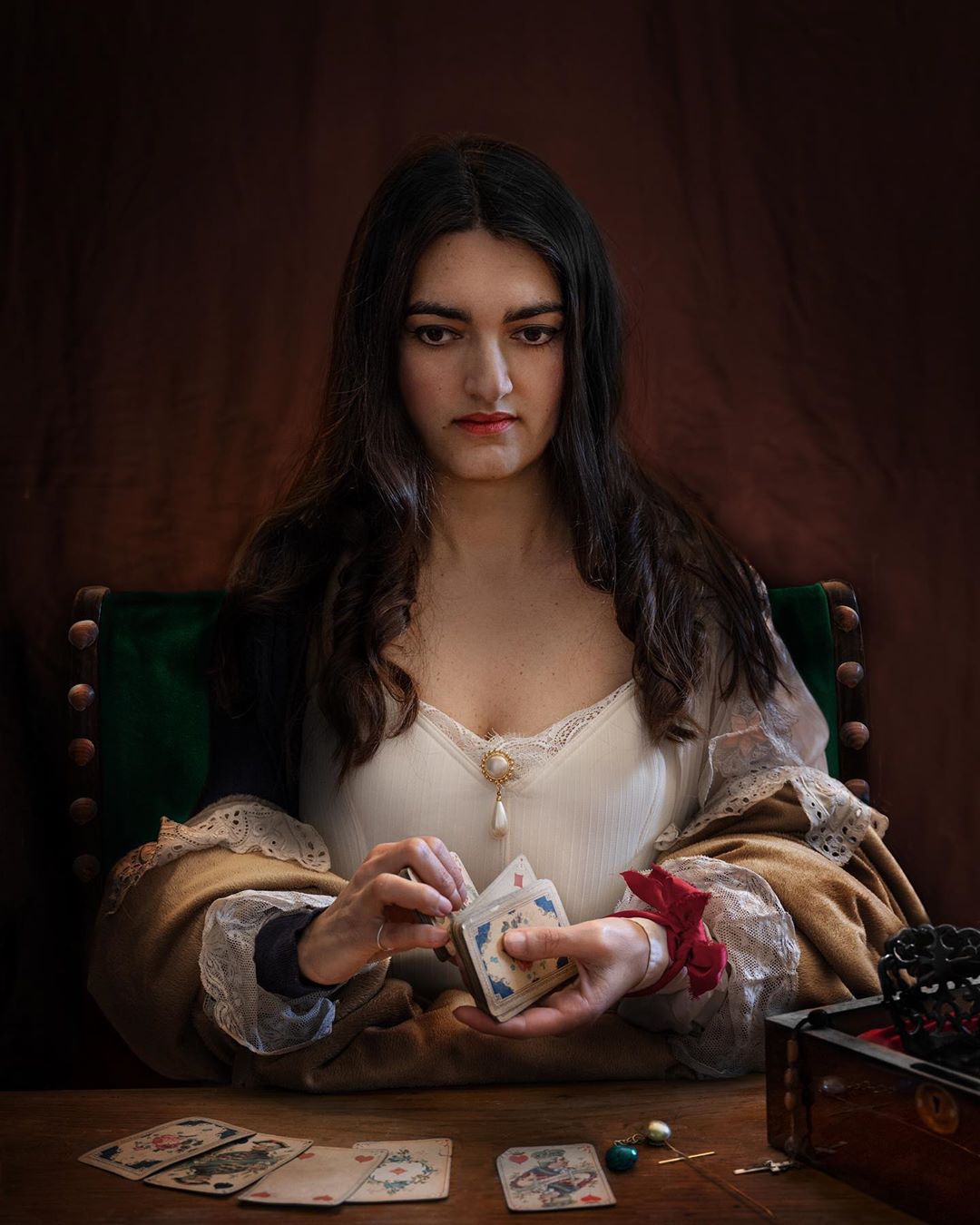 A noteworthy sphere of Holst's current influence is in the cosplay artform - a fine example of which has been posted online recently (see above) and features on Yale's Instagram page. Congratulations to the model and author 'Ahlam' for her superb contemporary version of Holst's The Wish which was first exhibited at the British Institution 179 years ago, purchased there by Lord Northwick and admired later by Rossetti who, I am sure, would also have found this latest variant worthy of his poetry.

Also on a somewhat daemonic theme is the first exhibition devoted to the infamous Thomas Griffiths Wainewright (1794-1847) - friend to Holst, Blake and Fuseli before his transportation to Van Diemen's Land in 1837 as a convict. This pioneering exhibition,'Thomas Griffiths Wainewright: Paradise Lost', was organised by the Tasmanian Museum and Art Gallery and mounted, unfortunately, during a period of Covid restriction. However, judging from an exhibition walk through video it achieved a high level of display and the catalogue is certainly a 'must have' purchase for anyone interested in this vibrant corner of British Romantic Art. The museum recently purchased Wainwright's fine portrait of his cousin Henry Foss, first published in the 2010 Holst catalogue, which is one of only four oil paintings known by the artist/author/forger/murderer accomplice. They include almost all the dozens of watercolour portraits of Hobart notables that was Wainewright's passport to a tolerable life as a convict artist. And as a result of the wish to maximise the Wainewright net for the exhibition, an attribution speculation, first made by Martin Butlin in 1994, has reared its head again - this is considered in Holst, Wainewright and Bertalda (see below). The catalogue is more of a first monograph on Wainewright as an artist and is a worthy addition to the literature. In view of its flamboyant subject the design, lavish decoration and full page illustrations are a delight to navigate: 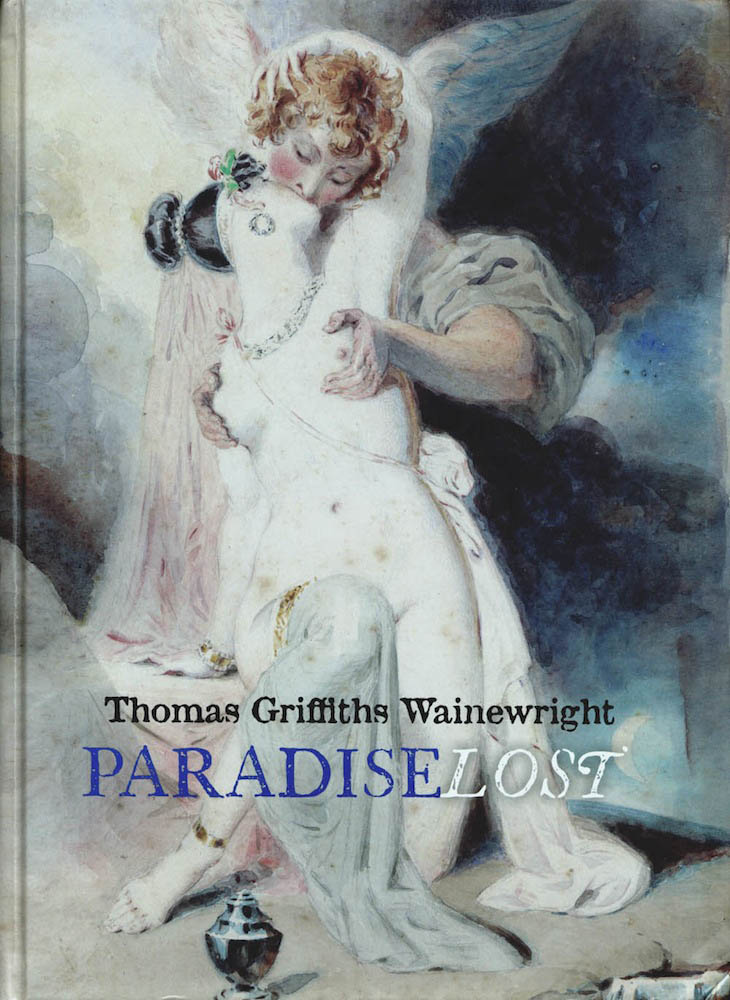 A biographical outline of Holst